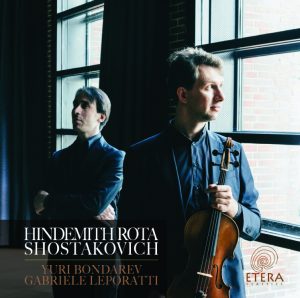 Yuri Bondarev has found for his Etera album in Gabriele Leporatti, former student of the legendary Maria Tipo, a worthy partner. He too is clearly a romantic with the perfect ear for those ineffable subtleties that find a way past confrontations of apparently irreconcilable opposites and make it possible to combine four composers of apparently totally diverse world views in such a way that what might at first glance look like musical visiting cards (“Look at us, here we are!”) ends up seeming inevitably right. Hindemith’s viola sonata op. 11 no. 4 next to Nino Rota’s Intermezzo and Shostakovich’s final work, with Rachmaninov’s Margaritki (“Daisies”) as an effective bonus – it would seem, musically speaking, that the contrasts between all these ought to jar, unless the performers were to approach the works with a laxity that would level down any potential conflict.

But the Bondarev-Leporatti duo has found a third way and looked at these four composers under the aspect of their “romantic soul”. The result is as astonishing as the encounter between Schumann and Respighi. Once the whole collection has been listened to, the impressionistic idiom of the Fantasie with which Hindemith begins his sonata has the effect of an echo of the Margaritki, while Rota’s lyrically buoyant Intermezzo blends effortlessly into Shostakovich’s sparse Pizzicati, and the life that ended with this homage to the Moonlight Sonata (though without any sense of resignation) finds its resurrection in the little song by the great Sergei. Etera or Eterna? that is the question…

his is an impressive recital from a violist who deserves to be widely heard and appreciated. Very good recorded sound and informative program notes, despite the consistently dodgy translation.